Strengthening infrastructure and access to resources needed for refugees to become self-reliant and to support countries that welcome them. A number of factors can impede a refugee's ability to attend school or enter the workforce, including:

The private sector can build the underlying infrastructure and provide the resources needed for refugees to get back on their feet.  Additionally, the private sector can support countries that are stepping up for the first time to welcome refugees or changing their policies to allow them to work and attend school.

Examples of work in this space include: 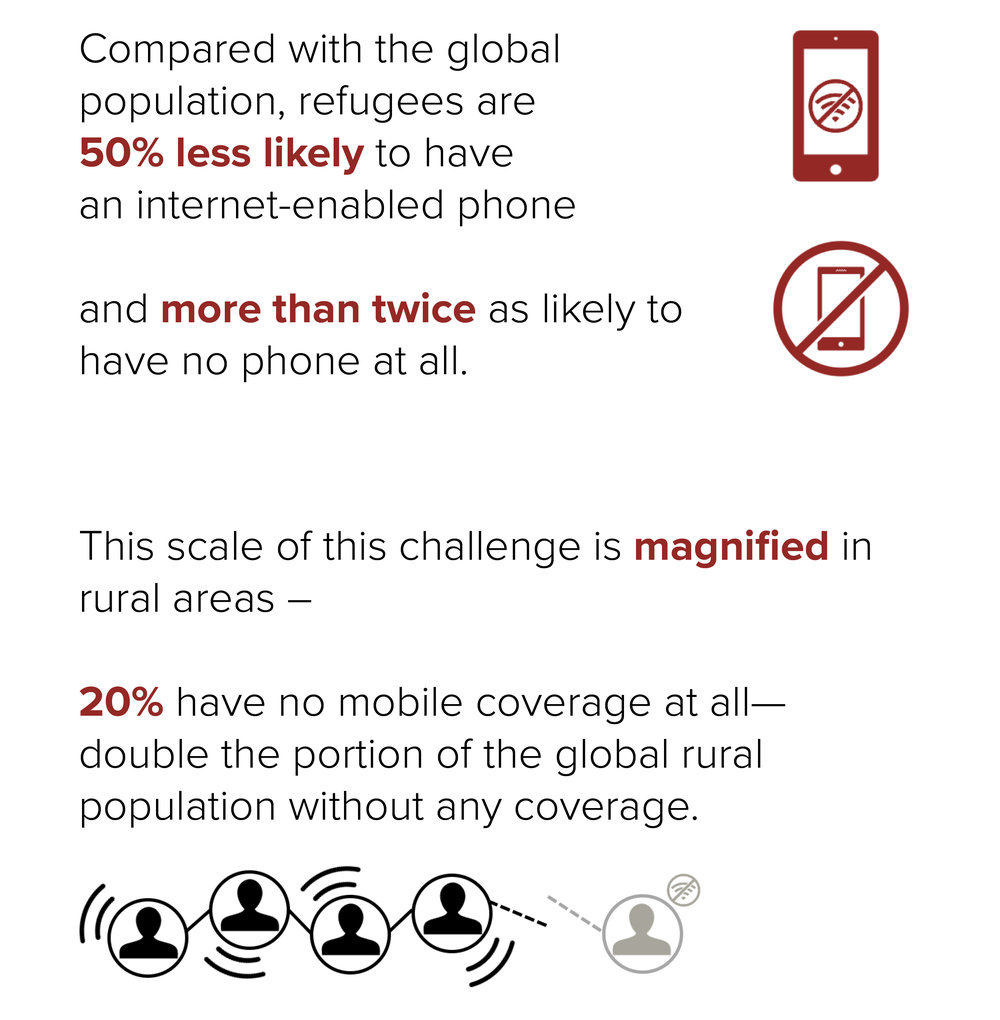 Learn more about this challenge and how the private sector can contribute to the Connectivity for Refugees project here.

Learn more about the barriers refugees face to achieving self-reliance and how companies can make a difference here.

Here is how the private sector is helping:

In response to the ongoing refugee crisis in Europe, the International Rescue Committee, Mercy Corps, and Google partnered to create Refugee Info Hub.

Humanitarian organizations like the IRC and Mercy Corps were early responders to the crisis and recognized that access to accurate and credible information was a priority and safety concern for refugees arriving in Greece. Refugee Info Hub was a strong compliment to ongoing information and protection activities to protect the most vulnerable already underway. Google’s partnership allowed organizations to come together and collaborate quickly on an effective digital solution.

In October 2015, the site was created and launched in 36 hours using Google Docs. The site has since transitioned to an alternative open source CMS as it expanded to new countries outside of Greece.

In the past seven months, more than 60,000 refugees in over 20 locations have used the site with more than 30 NGOs providing content.

The JPMorgan Chase Foundation is supporting innovative programming to enhance the quality and scale of IRC's financial coaching services in its domestic network of 22 offices in 13 states. Refugees arrive with little savings, no assets, and no understanding of the complex US financial system in which they find themselves. The absence of basic budgeting skills and a lack of understanding of credit can result in poor financial management and early missteps that can haunt a refugee family for many ears after their arrival. Once refugees - like many other immigrant and low-income families - have a negative credit score, they are essentially excluded from mainstream and affordable financial products.

JPMC's investment has enabled IRC to 1) bolster the integration of existing financial coaching efforts in the Oakland and San Diego offices and 2) to develop a model for financial coaching that meets the unique needs of IRC's refugee and immigrant clients and provide learning for service providers working with low income populations more broadly.

In 2013, WFP and MasterCard rolled out an electronic payment (e-card) program in Jordan and Lebanon within a broader partnership that aimed to expand the use and delivery of “digital food” – in the form of cash and vouchers – to the hungry poor around the world. The partnership linked MasterCard’s expertise in payment systems with WFP’s expertise in providing food assistance. MasterCard provided technology and expertise in pre-paid card solutions and set up the e-card system that would be the backbone modality of WFP’s food assistance to refugees in Jordan and Lebanon.

Families received a card loaded with US$27 per person each month, which could be redeemed for a list of items at participating local stores. These included fresh produce not normally found in traditional food rations. The e-cards enabled refugees to meet their needs and helped boost the local economy in these two countries – Jordan being host to the largest number of refugees.

Besides being more efficient than in-kind food aid and even paper vouchers, the new e-cards broadened people’s food choices and served as an excellent example of how our combined efforts can offer powerful, cutting-edge ways to fight hunger.

For over 10 years, UPS has partnered with the US Fund for UNICEF, providing grant funding to a range of UNICEF programs, in-kind shipping, freight and expertise. UPS has supported UNICEF's work in emergency preparedness and relief efforts, girls’ education, child protection, and UNICEF’s School-in-a-Box program.

In 2013 and 2014, UPS mobilized its worldwide network of staff, warehouses, and shipping and freight services to help UNICEF in the refugee emergency, culminating in one of the most complex relief efforts UPS and UNICEF have partnered. Over this two-year period UPS helped send nearly 44,000 winter clothing kits to refugee children in Lebanon and Northern Iraq. UPS were involved throughout the project planning and a critical partner to its execution.